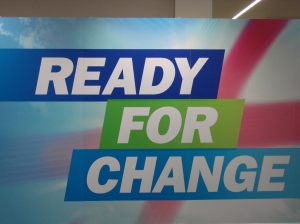 I am not sure how it looked from the outside but it certainly seemed to have been a successful Party Conference from the inside. It was strange from my point of view not staying in a hotel and therefore just travelling down everyday.
For those interested I will give a quick summary of some of my activities for each day of the Conference.

Tuesday. An early start as I had to be in Manchester ready to do a live interview on BBC Radio Manchester shortly after 7am.

I then had meetings scheduled with other Parliamentary Candidates followed by a photo call for The Royal British Legion.

I had lunch with representatives of the Nuclear Power industry organised in conjunction with TUSNE ( Trades Unionists for Safe Nuclear Energy ).

In the evening I attended a reception organised by the Manchester Airports Group.

Wednesday. I managed to watch a little more of the Conference than on the previous two days. I did an interview for the Financial Times who were doing a piece on Bury North which actually appeared in Friday’s paper.

In the afternoon I attended the Conference Social Action Project in Radcliffe where my colleague Councillor Michelle Wiseman has been bust organising a major refurbishment of the building and facilities for the Radcliffe Boys and Girls Club. David Cameron had visited the project on the Sunday afternoon and on Wednesday it was the turn of his wife Samantha and Party Chairman Eric Pickles to visit the project. In the evening I attended a business reception organised by the Conservative Friends of Israel at which the principal speaker was Philip Hammond M.P. the Shadow Chief Secretary to the Treasury.

Thursday. In the morning I did some filming along with a group of other Parliamentary Candidates in the North West for Granada. In the afternoon I was, as many will have seen, on the platform during the Leader’s speech. Can I just say thank-you to all the many people who contacted me to say they saw the coverage and give me their reaction. I think I have managed to contact everyone but apologies if I have missed anyone out.