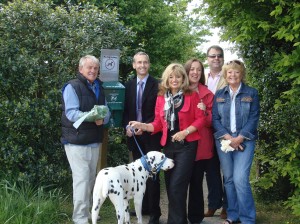 Earlier in the day I had toured the new Bury police station which will be opening for business next month. I then went to the Bury Society for Blind and Partially Sighted People’s Centre to help judge the competition to find the best photographs to be featured in the Bury 2011 Calendar.

The main event in Parliament this week has been the State Opening of Parliament by Her Majesty The Queen. Having watched this tremendous occasion on television many times I wondered how different it would be witnessing events from my position as a Member of the House of Commons.

Proceedings for the Commons started as they do every day with prayers. This part of the day is the only part that is not filmed and the prayers are led by the Chaplain who enters the Chamber with the Speaker. Prayers also plays a role in determining who sits where in the Chamber. I have been asked many times if I have been allocated a specific seat in the House. The answer is that you are not given a specific seat. Where you sit depends on whether you have been into the Chamber early enough to reserve your place for prayers. The Chamber opens at 8am and you can then go into the Chamber and reserve your seat by writing your name on a small green card and placing it in the cardholders on the back of the green leather benches. Then you have to be in your reserved place when prayers take place and if you are you can then keep that seat for the rest of the day. If you reserve a place but are not in your place for prayers you lose your seat. The other interesting point about prayers is that all Members turn to face the wall when prayers are said. The reason for this as with so many things in the Palace of Westminster lies in history. In the days when Members of Parliament attended the Chamber wearing their swords as they could not kneel down for prayers facing forwards because their swords would get stuck on the leather benches they solved the problem by turning to face the wall and kneeling on the benches. Incidentally each member has a coat hangar in the cloakroom and on he coat hangar is a piece of pink ribbon in order to hang up your sword – I have not used mine yet mind you nor for that matter I have used the coat hangar!

The Prime Minister and the Leader of the Opposition ( this year as Labour have no Leader at present the Acting Leader led the Labour M.P.’s ) then lead all those M.P.’s who wish to go up the corridor that links the two Houses. I guess the Prime Minister must have reached the House of Lords before I had even set off. When I did arrive at the entrance to the House of Lords the numbers already there were so great that I could see nothing in any event the speech was nearly over and so I watched the last part on a television monitor outside the House of Lords. We then proceeded back to the House of Commons where all that happened was that the Speaker passed his chair and we all dispersed until the opening of the debate on the Queen’s Speech at 2.30pm. As is often the case with big events I have to say that you probably see more on the television than you do from being there. What you miss on the television is the sense of history and tradition that runs through this most spectacular of Parliamentary occasions.

My second week as the Member of Parliament for Bury North has seen the first week of actual Parliamentary business in particular the election of the new speaker and the swearing in of all the M.P’s.

The Speaker Mr John Bercow was re-elected – as Speaker – in his Buckingham Constituency and this week he was re-elected as Speaker of the House of Commons. The next business was the swearing in of every M.P. who wishes to take part in the business of Parliament. The only M.P.’s who do not swear in are the Sinn Fein Members elected in Northern Ireland. I did my swearing in at about 10 to 11am on Thursday morning.

My main priority has been to try and get to the bottom of my backlog of emails, telephone calls and letters that built up in the first few days of my election. Logically as the residents have not had an M.P. to contact during the last few weeks when Parliament was dissolved it is understandable that lots of people want to contact me.

Next up? Well I am travelling down to Westminster tomorrow and on Tuesday it is the State Opening of Parliament and the Queen’s Speech which sets out the planned business of the new Government over the next approximately 18 month period.

David with the volunteers on the BBQ stall

The last few days have felt more like normality as I have carried out a number of engagements around the Constituency.

On Friday I visited the Mosque at Parker Street and met with many members of the Muslim Community.

Yesterday I attended the Gala at Bury Grammar School for Girls which was on the theme of the circus. The weather was reasonably fair and everyone had an enjoyable time.

Today after attending church at St.Anne’s I attended a lunch celebrating the life of the late Margaret Robinson who sadly died a few weeks ago. Margaret raised funds for many good causes in particular Bury Hospice and she will be sadly missed by all who knew her.

Finally just a word to the many people who have written or emailed me in the last few days. The stream of communications received before the election has now become a torrent and I am doing all I can to reply to everyone personally. If you have not received a reply yet you can be assured one will be on its way!

I am in there somewhere!

I have now returned from a very hectic first three days in Westminster. Although momentous events were unfolding around me I have been more concerned with trying to get to grips with all the new arrangements. we have had a series of briefings and training sessions as well as being issued with our passes and being shown where our desks are. It may well be many weeks before I am allocated an office so for the moment I am sharing one of the Committee rooms in the House of Commons. One of the things we had to do was have our photo taken with all the new members elected as the 2010 intake.

My first priority is to put all the basics in place as soon as I can so I am able to provide a first class service to constituents. To all those who have already been in touch I can reassure everyone that no one will be forgotten.

Yesterday was one of those days when it is difficult to find the right words to easily sum up my feelings. I travelled down to London in the morning after doing a live BBC Radio Manchester interview at 7.30am. The journey into Manchester took nearly as long as the train to London. I have booked in to St Ermin’s Hotel on Caxton Street which is a few minutes walk from Westminster. (I have checked what the cost of the TravelLodge is so I will not claim more than that for this first week). There is in fact a limit of £130 per night as to how much you can claim back on hotel costs. I managed to get my train fare down to £66.20.
I promised I would not forget that it was taxpayers money that is used to pay expenses and I will always remember that.

I arrived at Portcullis House at 1.30pm and spent the rest of the afternoon in a series of briefings with various departments of the House of Commons including being taken on a quick tour of the Palace Of Westminster. At 6pm I attended a meeting of the 1922 Committee which is the name given to a meeting of the Backbench MP’s, when in opposition this includes everyone so Committee Room 14 was full to overflowing when David Cameron rose to explain the latest position regarding the negotiations with the Liberal Democrats. During the afternoon news reached us that the Prime Minister had announced he was stepping down as Leader of the Labour Party. I could never have imagined my first day in Westminster would be in quite such momentous circumstances.

Following the General Election yesterday in the early hours of today at around 5am the result here in Bury North was announced and with 18070 votes I was elected to serve as the Member of Parliament. I feel tremendously honoured that the people of Bury North have placed their trust in me. I will try and not let them down.

The campaign has been very good natured and despite our political differences I got on very well on a personal level with the Candidates from the other main parties and I am sure Maryam Khan and Richard Baum will have successful political careers. I hope the fact that I have been elected at the fourth attempt will give them the determination to carry on.

Above all I want to say a big thank you to all those who took the time and trouble to vote for me yesterday.