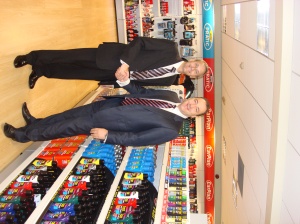 I have had a busy few days as I spend my last week in the Constituency before the Party Conference and Parliament resumes.

On Saturday I attended a concert commemorating the 70th anniversary of The Battle of Britain performed by the Lancashire Fusiliers Association Band.

On Sunday I attended the official rededication of the Parish Hall at St. Anne’s Church in Tottington which was performed by the Bishop of Bolton in the presence of the Mayor and Mayoress of Bury.

This week I have had meetings with a number of constituents about various problems and queries. On Monday I addressed the Sixth Form politics class at Bury Grammar School for Girls ( which some of the boys also attended) and answered their queries in a Question and Answer session.

Yesterday I was up early to address a group of local businessmen at a 7am Breakfast meeting held at the Bolholt Hotel and again I answered queries on a range of business related subjects during another Question and Answer session. Later I had a briefing meeting with the Principal and Chief executive of Bury College where we discussed the various issues and developments at the College.

Earlier today I had a meeting with the Chief Executive of Tetrosyl Limited at their Head Office at Bevis Green. Tetrosyl are very much a well kept secret within Bury. Each year they manufacture literally tens of millions of car care products here in Bury and they are exported around the World each one proudly bearing the imprint that it was made in Bury.