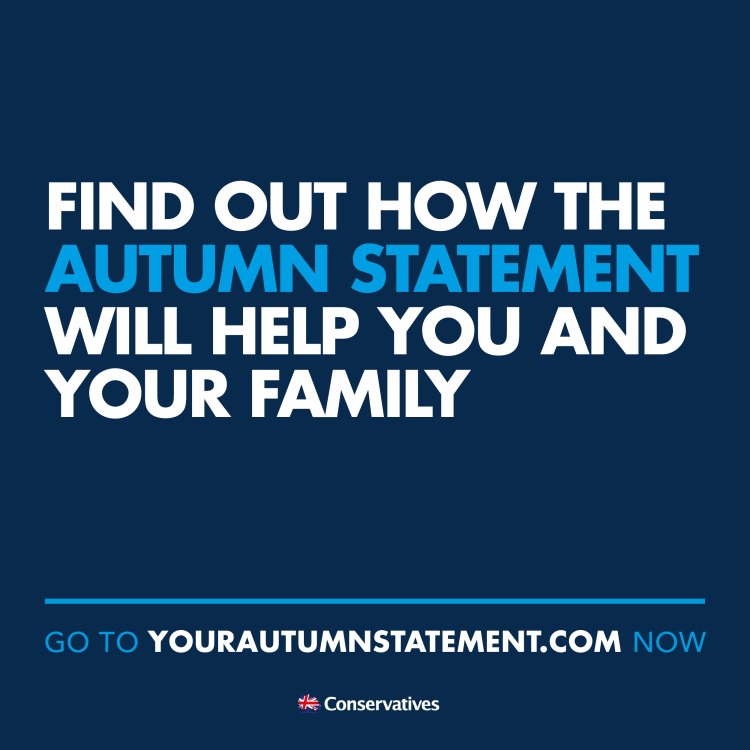 Chancellor George Osborne has updated MPs on the state of the economy and the government’s future plans in his Autumn Statement.

Britain’s economic plan is working, but the job is not yet done – we need to keep taking the difficult decisions to secure the economy for the long-term.

The biggest risk to Britain comes from those who would abandon the plan – and borrow and spend more. Our long-term plan will secure a responsible recovery for all. The key points are outlined below.

Employer National Insurance contributions are to be scrapped on 1.5 million jobs for young people.

The personal income tax allowance will rise to £10,000 from April 2014, and then increase from 2015-16 by the Consumer Prices Index (CPI) measure of inflation.

A married couples and civil partners tax break, which is set to cost about £700m a year, is proposed to start in April 2015, enabling people to transfer £1,000 of their income tax allowance to their partners.

Business rates in England to be capped at 2% rather than linked to RPI inflation, with some retail premises in England to get a discount. Businesses moving into vacant high-street properties will have their rates cut by 50%.

From April, a new tax relief is to be introduced for investment in social enterprises and new social impact bonds.

The number of people claiming unemployment benefits is down 200,000, with unemployment now forecast to fall from 7.6% this year to 7% in 2015 much earlier than expected.

A boost in the government’s start-up loans scheme will aim to help 50,000 more people start their own businesses.

Export finance capacity available to support British businesses will be doubled to £50bn.

Petrol taxes stay frozen – a planned rise of 2p per litre by the last Labour Government for next year is to be scrapped.

Regulated train fares will rise in line with inflation, not at 1% above RPI as planned.

The tax disc to show motorists have paid vehicle excise duty is to be replaced with an electronic system.

An extra 30,000 places at English universities will be created in 2014-15. The following year, the current cap on student numbers will be abolished entirely.

Science, technology and engineering courses will receive increased funding, and a new science centre in Edinburgh University is to be named after Prof Peter Higgs, the discoverer of the Higgs boson particle.

The proportion of young people from disadvantaged backgrounds applying to university is up.

An additional 20,000 apprenticeships are to be funded over the next two years.

All pupils at state schools in England in Reception, Year 1 and Year 2 are to get free school lunches from next September, at an estimated cost of £600m a year.

Overall welfare spending is to be capped.

Anyone aged 18 to 21 claiming benefits without basic English or Maths will be required to undertake training from day one or lose their entitlement.

People unemployed for more than six months to start a traineeship, take work experience or do a community work placement or lose benefits.

The government hopes £1bn in loans will boost housing developments in Manchester and Leeds, among other sites.

Councils are to sell off the most expensive social housing and rundown urban housing estates to be regenerated, and workers who live in council houses are to be given priority on housing lists if they need to move home to find a job.

The UK’s “underlying” deficit – has been revised down by the Office for Budget Responsibility (OBR).

Departmental budgets will be cut by about £1bn next year and the year after to help cut the deficit.

Tax allowances aiming to encourage investment in shale gas to cut tax on early profits by 50%.

More investment in “quantum technology”, which involves attempting to apply the strange behaviour of materials on a tiny scale to practical purposes, is promised.

The government’s pledge to spend 0.7% of gross national income on international development is to be met without an increase to the current aid budget.